Crypto Crash: Why It Happens & How to Spot the Next One 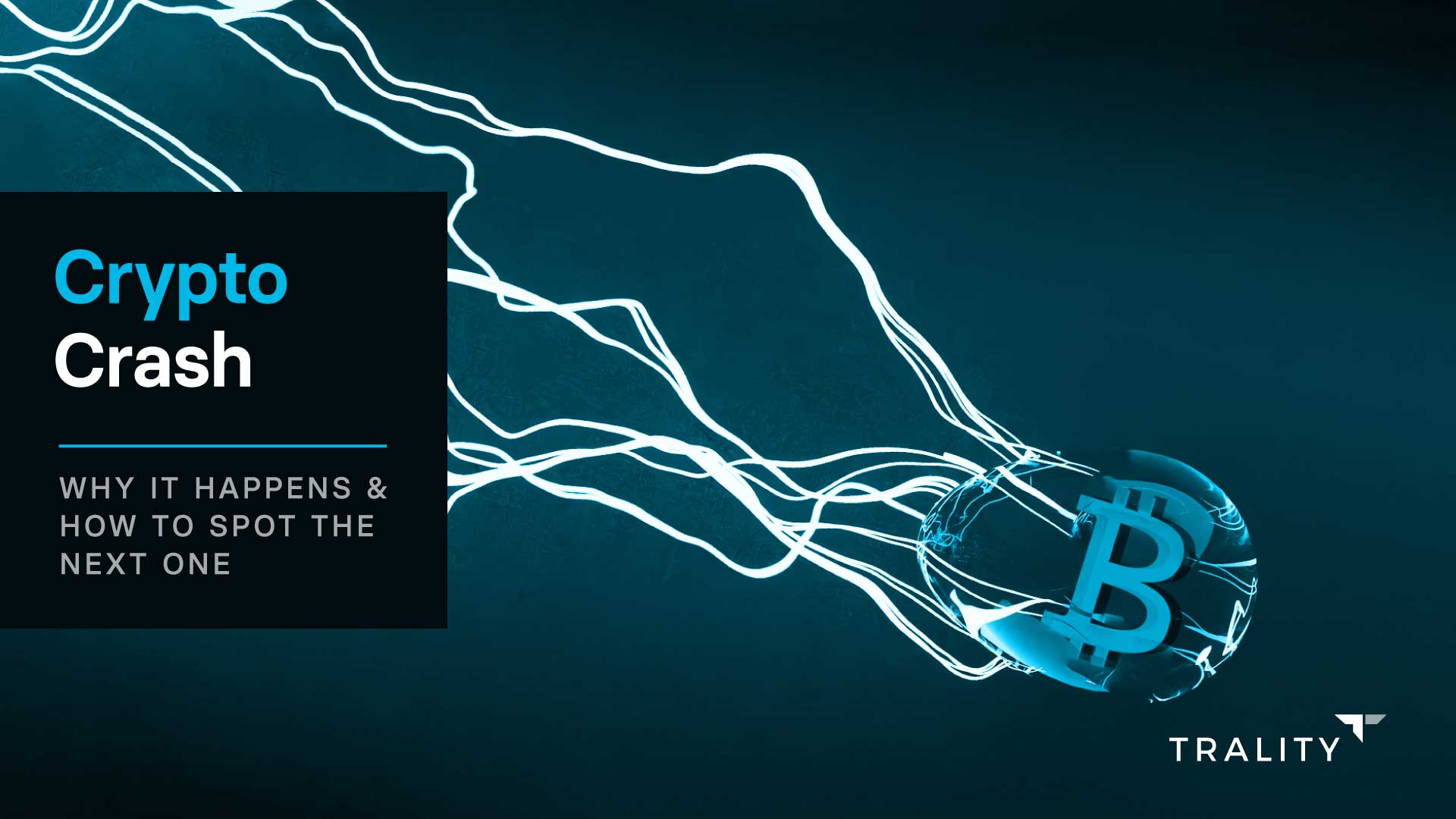 Token prices have crashed, crypto companies are laying off employees, and even the gold standard of the crypto world, Bitcoin, lost 70% of its value and dropped below $18,000 for the first time in two years. 2022 has been a rough year for cryptocurrencies and many of us have a lot of questions about the market and its long-term prognosis.

A crypto crash occurs when the cryptocurrency market experiences unexpected volatility resulting in a significant downturn over days or weeks. While the crypto market is no stranger to ups and downs, this year’s so-called “crypto winter” is unprecedented in its scale.

In this article, we’ll cover why crypto crashes happen, how you can protect yourself against them, and how to predict the next one.

What Is a Crypto Crash?

In traditional finance, a market crash refers to when the value of an index experiences a 10% drop over several days. However, a crash is not the same as a correction. Markets, whether crypto or otherwise, are characterized by cycles: what goes up, must come down (and go back up again). Corrections and dips happen and they are entirely normal and expected.

Bitcoin and other cryptocurrencies are infamous for being highly volatile assets, with fluctuations being simply corrections as the market naturally adjusts itself. You might have come across the website that tracks the number of times Bitcoin has “died” (459 and counting). Across the crypto market, it’s not uncommon for corrections to carve away 10% to even 20% of an asset's value from its most recent peak. They are generally short-lived and, as mentioned, a normal part of a market cycle.

A significant downturn, however, is considered a crash. Crypto market crashes are usually the result of more far-reaching circumstances, such as sudden changes to international regulations, macroeconomic events, or major company announcements.

The crypto crash of 2022 is noteworthy because of its scale. According to data from CoinMarketCap, the global cryptocurrency market was worth $766 billion on 1 January, 2021. It peaked at $2.9 trillion in November 2021 and then inflation, rising interest rates, and the Russian invasion of Ukraine, among other things, resulted in the loss of more than 70% ($2 trillion) of its aggregate value.

Crypto crashes can happen for a variety of reasons. It’s important to note that the 2022 crash isn’t only affecting cryptocurrencies. The global stock market has also suffered as a result of the Russian invasion of Ukraine, inflationary fears, and interest rate hikes.

And 2022 has been a rough year for stock indexes, with many major ones falling more than 20% below the gains made in 2021. Experts now believe that the global economy may be due for another recession.

These factors have obviously impacted the crypto market in a variety of ways, but there are other reasons that are unique to cryptocurrencies, such as:

Collectively, all of the above-mentioned factors triggered a panic and further sell-offs as consumer confidence was negatively impacted. However, we can’t ignore the elephant in the room, namely the catastrophic effects that the Terra Luna crash had on the market.

Terra Luna: A Crypto that Crashed in 2022

The collapse of Terra Luna in May 2022 is widely believed to be the biggest trigger for the current plunge in the crypto market. Terra Luna was an extremely hyped experiment in decentralized finance, one that was developed and launched in 2019 by Korean crypto firm Terraform Labs, which issued two tokens, Luna (LUNA), the protocol’s native currency, and TerraUSD (UST), a stablecoin tethered to the value of the US dollar. Terraform Labs started selling TerraUSD in 2020, pegging its value to the US dollar. But unlike other stablecoins such as Tether, TerraUSD was not backed by any reserve asset. Instead, it used an algorithm to keep its value around $1 by linking it to Luna.

To create (mint) UST, an equivalent amount of LUNA had to be destroyed (burned). If the value of UST went over $1, then LUNA would be burned, which minted more UST, making it less valuable and helping it maintain its stability.

If UST went below $1, then the opposite happened. UST holders were encouraged to sell or burn their tokens to create more LUNA and bring UST’s value back to $1.

This arrangement worked well for a time, and LUNA grew to become one of the most successful decentralized finance (DeFi) coins and the seventh most valuable cryptocurrency by market capitalization.

A huge part of the success of Terra Luna was a lucrative scheme with a stablecoin lending platform called the Anchor Protocol, which promised investors annual returns of nearly 20% if they lent out their UST holdings.

Terraform Lab’s algorithm even managed to weather the bearish period that started during the first quarter of 2022. However, in May 2022, something happened that caused investors to dump large quantities of UST. While the exact cause is unclear, it pushed UST to lose its peg to the dollar and set off the chain of events that crashed LUNA’s value.

The ensuing mass panic caused more UST to be burned, minting even more LUNA and increasing the circulating supply. This cycle had a knock-on effect that sent both tokens on a race to the bottom.

The value of LUNA dropped to less than a cent — a stark contrast from its all-time high of $119.18 a few weeks before in April 2022.The fallout sent ripples across the entire ecosystem and caused over $500 billion in losses as it pushed Bitcoin, Ethereum, and numerous other cryptocurrencies to new lows.

But that’s not the end of the Terra Luna story. Terraform Labs has announced a “revival plan” involving the launch of Luna 2.0. The new token had a shaky start and lost over 75% of its value within 24 hours, but it has managed to regain some of its value. Whether it’ll be a success remains to be seen.

How to Protect Against Crypto Crashes

The Terra Luna fiasco highlights the danger of investing in the unregulated world of decentralized finance. But investors are not completely helpless and there are ways to safeguard your portfolio against future crypto crashes. These include:

How to Predict the Next Crypto Crash

Cryptocurrencies have a market cycle with four phases that can be used to determine the best time to enter or exit a position. A market cycle refers to the period between an asset’s lowest and highest point. It has four stages:

Accumulation: This is the early stage when the value of an asset has bottomed out and recovery seems possible. People start to buy once more, thinking the worst is over.

Markup: This stage is when the market starts to maintain some stability as it continues to go up.

Distribution: At this stage, sellers start to dominate as the market reaches its peak.

Markdown: The bubble bursts and the price starts to fall.

All markets follow this cycle. It typically lasts six months to a year on average. The volatility of crypto can make it harder to correctly identify the phases, but it’s not impossible. For example, Bitcoin’s market cycle is visible in mid-2021 when its price rose from $30,000 in July and peaked at $68,000 in November before it started to drop, signaling the start of the markdown phase.

Cryptocurrencies have yet to recover from the 2022 crypto winter as the market is still in the markdown phase. However, it’ll likely enter the accumulation phase by the end of 2022 or early 2023.

Please note that the concept of market cycles doesn’t apply to every crypto asset. There are thousands of tokens that are in the graveyard with zero chance of recovery. Only invest in projects that have provable activity.

Bitcoin has had multiple “boom and bust” cycles over the years, and it will likely continue to experience these sorts of cycles in the future. Below are some of the major Bitcoin crashes recorded over the past decade:

What do all of the above events have in common? Bitcoin recovered and eventually increased to reach new highs. Although tempting, traders should try not to focus on 24-hour or even 30-day charts. Far better to step back and look at the bigger picture. Bitcoin may have taken a big plunge in 2022, but if it follows the same trends as past crashes, then it willl likely recover and potentially reach new highs in 2023 and beyond.

Crashes are a normal part of the ebb and flow of the crypto market. The crypto crash of 2022 has understandably caused a lot of stress and anxiety in the investment community because of its size and scope, but rash decisions are always best avoided.

If this is your first big dip, then the best advice is to calm your nerves and wait for prices to recover as they enter the accumulation phase of the market cycle. Give the market time to breathe before you consider selling. After all, who wants to take a loss.

While there are no guarantees that the market will return to previous highs any time soon, there are some positive signs. For instance, developer activity is continuing on many blockchain systems, venture investments are still happening, and crypto platforms are continuing to hire despite a spate of industry layoffs. .

It’s also important to note that every market has experienced a downturn in 2022, and financial experts are forecasting a global recession soon. The downtrend isn’t one that is unique to the crypto market.

The best approach? Simply wait it out.